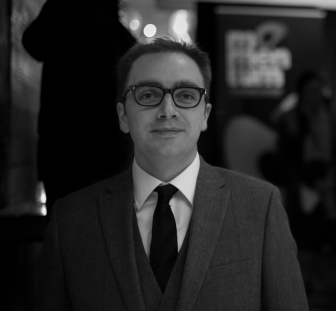 Cyrus Meurant (b. 1982) is one of Australia’s most prolific young composers and performers. His critically acclaimed work spans theatre, dance, concert hall and the health sector. He has composed for the Australian Chamber Orchestra, Melbourne Symphony Orchestra, Omega Ensemble, Ensemble Signal (USA), NIDA, Orchestra Victoria, Inventi Ensemble, Alleyne Dance (UK) and the Momentum Ensemble (Australian Youth Orchestra). His music for theatre and dance has been performed around the world by companies including The Australian Ballet and Divadlo F. X. Šaldy (Czech Republic) and programmed at the Theatre Basel, Switzerland, The Place, London and The Adelaide Festival. The Cyrus Meurant Ensemble forms to present his collaborative works in which Meurant performs on violin and keyboards.

Meurant studied composition and violin at the Sydney Conservatorium of Music, University of Sydney, with teachers including Anne Boyd, Ross Edwards, Matthew Hindson, and Richard Meale. He won both the Frank Albert Prize for Music and the Sarah Teresa Makinson Prize for Composition and later studied at the Conservatoire de Paris on a Churchill Fellowship with Frédéric Durieux, as well as at the Royal Academy of Music, London. He holds a Doctor of Musical Arts from the Sydney Conservatorium of Music, University of Sydney.

In 2018 his opera Herakleitos premiered at the Laeiszhalle Hamburg (Germany) performed by the Kreuzberger Kamerata conducted by Rebecca Lang, whilst his score for the ballet Le Petit Prince, (after Antoine de Saint-Exupéry), with choreography by Margaux Thomas, was premiered by the Divadlo F. X. Šaldy to critical acclaim – and repeat seasons – with Meurant as solo violinist. His work, Vessel, commissioned by the Australian Chamber Orchestra, was also taken on tour by the ACO Collective, directed by Finnish violinist Pekka Kuusisto.

The Canberra Symphony Orchestra has programmed a number of Meurant’s works, including his 2017 Concertino for clarinet and string quartet along with Monuments for oboe and drones. Featuring CSO Artist in Focus Diana Doherty, Monuments was programmed for the CSO’s Australian Series: Renewal concert at the National Portrait Gallery, recognised in Limelight Magazine’s Top Shows of 2019. In March 2020, the CSO Chamber Orchestra premiered Meurant’s When I stand before thee at the day’s end, featuring Concertmaster Kirsten Williams, the work received a standing ovation and glowing reviews. Most recently the CSO premiered Meurant’s Or, maybe, yesterday as part of the Australian Miniseries, an online initiative profiling Australian music through COVID-19.

Meurant has completed several ambitious chamber works during the COVID-19 pandemic, including, the flute and bassoon duo All through an empty place I go – commissioned for the Melbourne-based Arcadia Winds – and a song cycle, Stray Birds – commissioned for German baritone Birger Radde (Theatre Bremen) – based on the poems of Rabindranath Tagore.

Meurant’s music is often distinguished for its economy and elegance of expression whilst being continually renewed through interdisciplinary exchanges and collaboration. Since 2012, Meurant has composed a series of dance scores for choreographer Brett Morgan – Artistic Director of the National College of Dance. Featuring Meurant’s own ensemble of strings, winds and percussion, with Meurant as musical director, these works have included: The Spartans, KLASH, Wild Life, and the evening length works: Fusion and As time goes by. Collaborators on these projects have included: Michael Askill, Jess Ciampa, Alison Pratt, Andrew Smith, Michael Bardon, Nicola Crowe, Jordan Wett, Timothy Brigden and the Dance Makers Collective.

As an arranger Meurant has worked for Anne Sofie von Otter, Terry Riley, Kamran Ince and The Presets. In 2015 his arrangements for Taryn Fiebig and Richard Tognetti were featured in the Australian Chamber Orchestra’s Helpmann Award-winning Reflections on Gallipoli, directed by Neil Armfield (*Best Symphony Orchestra Concert). 2015 saw the release of his solo EP Seul while the 2016 album Monday to Friday, commissioned by Beaumont Care, garnered national media coverage for its contribution towards research of music in the treatment of dementia. Featuring musicians Sally Walker, Alexandru-Mihai Bota, Alison Pratt and Clemens Leske, Monday to Friday would go on to receive international recognition as a nominee for ‘Innovation of the Year – Dementia Solution’ at the Asia Pacific Eldercare Innovation Awards held in Singapore in 2019.

In 2019 Meurant released the EP Four Pieces as a limited edition 10-inch vinyl record, featuring Andrew Smith on soprano saxophone and the composer on electric organ. With support of the Seaborn, Broughton and Walford Foundation, Meurant then composed the multi-movement Music for Dance for The Cyrus Meurant Ensemble. Future performances are planned with the National Youth Ballet Company directed by Brett Morgan in 2021-22. Later in 2020 Meurant will release a new single, Sortie for solo piano, featuring the composer on piano (digital download and CD).